One of the best things about Rome, after sunsets over the eternal city, is that it is the only place in the world where one can get a quick hit of Caravaggio on the run.  Caravaggio 24/7. Unlike many women who marry Italian men, I had not studied anything Italian and came to Italy knowing nothing about art history.  Like many Americans, I had only heard of Leonardo Da Vinci, Michelangelo, and maybe Raphael, before moving to Rome.

But now I love Caravaggio.  He was a passionate screw-up, and an historic reminder that the real genius is not always the first in the class. The 16th century Baroque painter was a genius who, among his many talents, knew how to paint women.  I have spent plenty of time staring up at the Sistine Chapel ceiling while on various news stories at the Vatican, and there is no beating Michelangelo, but I have a small complaint about the Renaissance artist.  Michelangelo didn’t get women’s bodies right.  The same man who worked over every muscle and vein in his sculpture of David (and I know just how perfectly he did it because I spent some time with a cameraman on scaffolding above David’s curly locks as restorers were cleaning every pore), made women’s bodies look like men — strong and muscular with large shoulders and chest muscles.  I haven’t seen many women who are built like that, unless they are Olympic athletes.

Caravaggio was just the opposite.  Apparently he had plenty of women in his life from whom to get inspiration, from street prostitutes to noblewomen.  One of my favourite Caravaggio paintings is “Judith Beheading Holofernes”. The first time I stood in front of that painting, I wanted to jump back to avoid getting splattered with blood as Judith slices off Holofernes’ head.   Judith has beautiful porcelain skin and strawberry blond hair, with little curls sweeping around her face. A wrinkle between her eyes indicates a slight vexation over her need to chop off a man’s head.  Or perhaps she is worried that she is going to get her white blouse dirty.  But her strong hands and muscular arms seem to be up to the task.  Art historians have suggested that the model for Judith was a famous Roman prostitute named Fillide Melandroni. Caravaggio  apparently used her for several of his paintings.   I suppose Fillide Melandroni had the right combination of street smarts, grit and beauty. The dirty, wrinkled old woman watching can easily be imagined as a woman that Caravaggio observed in his Roman neighborhood.

Caravaggio, with his depictions of recognizable courtesans, chose to provoke the public and his sponsors.  Even in his choice of women, ‘bad boy’ Caravaggio is in contrast to other Italian artistic greats.  Raphael’s big love, the beautiful ‘Fornarina’ (Bread Baker) of Trastevere, also appeared in some prominent paintings, but Raphael was far more diplomatic and did not push the limits of propriety the way Caravaggio did.  Raphael’s works are serene, graceful and beautiful.  And if one wants female perfection there is always Sandro Botticelli’s “Birth of Venus,” or “Primavera.”  But for real women, I recommend Caravaggio. His works are turbulent, dramatic and passionate and they show women as they really are.

For the 400th anniversary of Caravaggio’s death, I did a feature on a team of researchers who were hunting for Caravaggio’s bones.  APTN cameraman, Paolo Lucariello, and I drove to the Tuscan port town of Porto Ercole where Caravaggio collapsed to the ground on a beach in 1610 and died shortly thereafter.

To find Caravaggio’s bones, speleologist Antonio Moretti put on a hard hat with a light on it and climbed down into the underground crypt at the cemetery in Porto Ercole.  Paolo and I descended the ladder after him, passing down the video camera and tripod.  It was dark and creepy down there.  I felt like I was in some Halloween film.  The place was filled up to knee-level with skeletons.  Some were whole, some were just skulls, and some had hair.   Moretti dug carefully through the piles of bones, sifting through skulls and femurs, looking for some that could be old enough and the right size to belong to Caravaggio, and put them into a plastic bag.  They were then taken to the University of Ravenna for further study.

It was on the streets of Rome where Caravaggio got into the trouble that led him to a series of escapes and exiles. Following a sort of tennis match on Via della Palla Corda in the center of Rome, Caravaggio ended up in a fight and killed someone.  The Pope sentenced him to death for murder and Caravaggio escaped to Malta.  After some time in Malta, he returned to Italy, painting both in Sicily and Naples.  In 1610, the last year of his life, Caravaggio painted “David with the Head of Goliath” — the anguished, bleeding head of Goliath is actually a self-portrait of the artist.

Caravaggio was apparently heading up the Italian coast in a boat, trying to avoid the papal state and get to the Tuscan area where a nobleman could help get him a papal pardon. But something went wrong and he collapsed on the beautiful beach known as ‘La Feniglia’ and died a few days later in Porto Ercole at age 39.

Several months after we descended into that bone-filled crypt, the researchers announced they had found a set of bones that they believed belong to Caravaggio.  Using DNA tests and carbon dating, they matched the bones for the year that Caravaggio died, by sex, age and height.  Although they were pretty sure that the bones were his, they could not guarantee scientific certainty.  They concluded that Caravaggio died from sunstroke while weakened from syphilis.

Caravaggio continues to be a source of fascination and admiration more than 400 years after his death.  And I continue to get my periodic inspiration for his works. I love to whip up the stairs to Rome’s Basilica di Sant’Agostino.  Although it is just a few steps away from Rome’s famed Piazza Navona, it always appears deserted and abandoned. There are a couple of bums who hang out on the steps, lining up their beer bottles and positioning plastic bags of stuff around themselves. As I fly by, always in a hurry, I think that, if Caravaggio were alive, he would stop and look at them and perhaps drag them off to his studio to have them serve as models for one of his paintings.  That’s what everyone loves about Caravaggio, the way he portrayed common people.

Often, when one enters the Basilica of Sant’Agostino, there is no one around, so I just zip over to the left and check out the “Madonna of Loreto” (or of the Pilgrims).  A pretty Madonna, apparently bearing a striking resemblance to a Roman prostitute named Lena, clutches a chubby baby Jesus who looks like he is about to hop out of her arms, as two peasants kneel at her feet.  Apparently the Madonna was a little too lusty for proper society in the 1600s. Her knee juts out a little provocatively, revealing the outline of her leg under her long burgundy dress as she leans against the doorframe. And here is a little secret —- do not tell anyone!  The last time I was there, I thought that the Madonna’s toenails were looking a little grungy, a little dark dirt around the edges, as though maybe she just didn’t have enough time to go to the estetista for her pedicure.  I just love her!

Despite her toenails, the Madonna’s feet are much cleaner than the peasants’ which are filthy. They actually look like they could belong to the bums hanging out on the steps outside the Basilica as I walked in.  There is something very normal about that attractive Madonna.  Her baby weighs a little too much and she didn’t have time to stick on some shoes before she answered the door.  There is something a little bit unkempt about her that makes her a little less Madonna and a little more mamma. 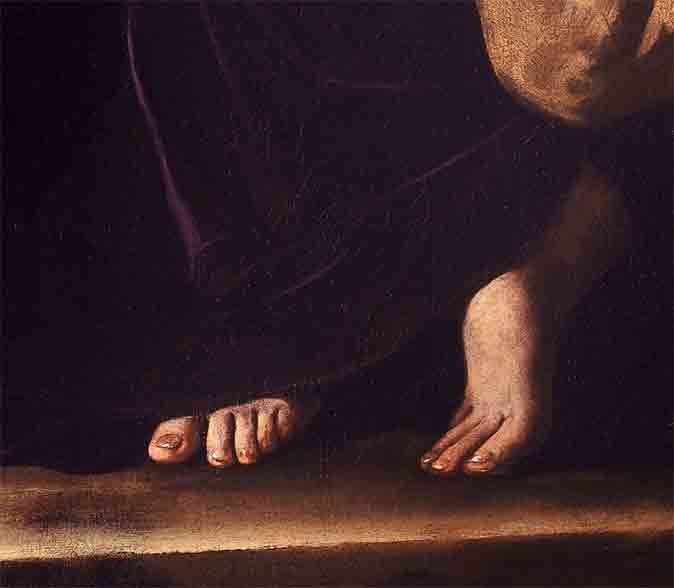 So I stay there for a few minutes, breathe deeply, try to absorb some of Caravaggio’s genius, and then off I run, cell phone ringing, work or kids calling, carrying my little bit of Caravaggio in me for inspiration.

Share this ArticleLike this article? Email it to a friend!
Email sent!